This is the farm where I grew up.  My Mother moved here when she was 10 and we bought it from my grandparents when I was 4.  It has seen many changes over the years.  In the late ’50’s, indoor plumbing and an addition was added to the house.  In the ’70’s the hog barn was taken down and the feeding floor was put in, which you can’t see for ALL THE TREES! The machine shed was added and the grainery  has been taken down.  The bins were sold and removed and at the beginning of this month, the barn and silos were taken down.  There have been several aerial photos taken over the years.  The first one was really big, taken in the 70’s.  You can actually see my Grandpa in it testing the fence.  In this one, I think taken around 2008, my Mom and I are in the garden.

The pictures are nice, but my favorite rendition was made by my cousin, Susan.

I am not sure when she made it.  But I love all the details she included.  It hangs at my aunt’s house and I admire it every time I visit.  It is so true to my grandparents farm.  The weeping willow tree south of the house – my cousin, David, hid in it during a night time game of Kick the Can.  We raised Guernsey cows, except for two Holsteins named Black and Decker.  Grandma always had a big garden opposite the house, across the driveway. 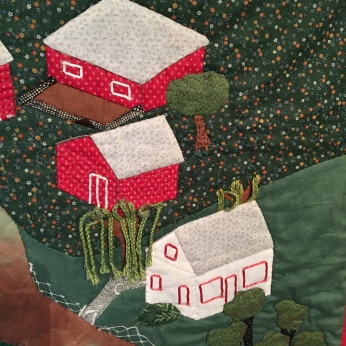 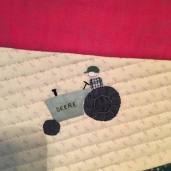 She was able to use one of Grandpa’s shirts for him on the tractor.  I love the milk cans too.  Grandpa delivered milk when our parents were young.  The fencing around the yard and the calf barn, the straight furrows (quilting) of the fields, the tool shed in the middle of the circle… I love all the details!  She did such a great job!  I could not begin to make such a beautiful tribute to our heritage.

One Reply to “The Farm”